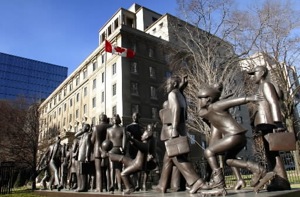 Manulife Financial Corp. saw a 62% drop in its fourth-quarter profit, which it blamed on losses in its oil and gas investments. The Toronto-based company reported net income of $246 million or 11 cents a share for the three-month period ended Dec. 31, 2015. Canadian banks to focus on growth, spending and buybacks after strong second quarter This compared with a profit of $640 million or 33 cents per share for the same period a year earlier. Core earnings amounted to $859 million in the fourth quarter, up 28% from $713 million year over year. Manulife (TSX:MFC) says a decline in its investments in energy resulted in a $250-million charge for the fourth quarter and a $876-million charge for 2015. The insurer says volatility in energy prices is a factor that could make it difficult for the company to meet its core profit goal of $4 billion this year. Manulife president and CEO Donald Guloien says despite the outlook, the company remains confident about the “underlying fundamentals” of its business. It announced that it has raised its dividend by 9% to 18.5 cents — the third increase in seven quarters. “This was a disappointing year in terms of net income, largely due to sharp mark-to-market declines in oil and gas prices, diminishing an otherwise great year,” he said in a statement. The insurer says it saw insurance sales grow by 20% to US$416 million in Asia and increase by 76% to US$303 million in Canada for the fourth quarter year over year. Insurance sales in the U.S. fell 17% to US$127 million in the same period. Keywords Earnings Facebook LinkedIn Twitter